Prize for microsurgery robot redesign. During the 20th edition of the Precision Fair, held this year for the first time in Den Bosch (NL), the Wim van der Hoek Award was presented under the auspices of DSPE (Dutch Society for Precision Engineering).

The prize went to Nick Habraken, who graduated from Eindhoven University of Technology (TU/e) on the redesign of a robot for microsurgery. According to the jury, his thoughtful design is not intended to replicate human motor skills, as often happens in robotics. “By looking closely at the application of the robot, Nick has arrived at a ‘non-human’, innovative topology (spatial structure, ed.), which is tailored to the function that the device has to perform.”

The second day of the Precision Fair 2021, Thursday 11 November in Den Bosch (NL), featured the presentation of the Wim van der Hoek Award. This award (also known as the Constructors Award) was introduced in 2006 to mark the 80th birthday of the Dutch doyen of design engineering principles, Wim van der Hoek (1924-2019). The Constructors Award is presented every year to the person with the best graduation project in the field of design in mechanical engineering at a Dutch or Belgian university of technology or university of applied sciences. This award includes a certificate, a trophy made by the Leidse instrumentmakers School and a sum of money, sponsored by TU/e institute EIASI.

Criteria for the assessment of the graduation theses include quality of the design, substantiation and innovativeness, as well as the suitability for use as teaching materials. The jury, under the presidency of DSPE board member Jos Gunsing (MaromeTech), received a total of seven nominations from TU/e, Delft University of Technology and Fontys Engineering University of Applied Sciences in Eindhoven.

The Wim van der Hoek Award 2021 eventually went to Nick Habraken, who studied Mechanical Engineering at TU/e. This spring he graduated on the redesign of a robot for microsurgery. Medical technology company Microsure in Son has developed this robot for, among other things, breast reconstruction. In such an operation, blood and lymph vessels with diameters of less than a millimeter must be sutured; that precision is almost unattainable for a human being.

Habraken started with an extensive review of the application and the resulting technical and ergonomic requirements. Robotics often attempts to replicate human motor skills. However, Habraken chose not to do this and thus arrived at an innovative, ‘non-human’ topology, which is tailored to the function that the robot has to perform. The design was of high quality according to the jury. “Nick provided a feasible, substantiated and fully developed elaboration for all functions, both on a system and a detailed level. The emphasis was on a sophisticated control of the degrees of freedom of the robot, which must be able to move in a compact, sterile space. This is entirely in the spirit of Van der Hoek’s design principles.”

Note for the press (not for publication)

Attached please find a photo, with the following suggested caption:

Nick Habraken, winner of the Wim van der Hoek Award 2021, receives the certificate that goes with the prize from the hands of jury chairman Jos Gunsing. In the foreground, some of the award nominees. (Photo: Mikrocentrum/Susanne van Doornik) 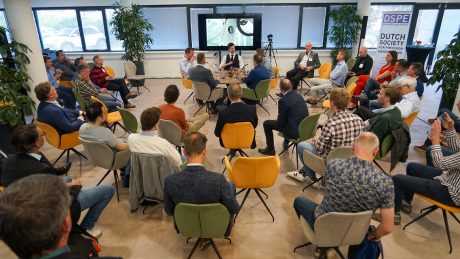 The first edition of the Tech cafe was a success. It was a great collaboration between the DSPE and the Mikrocentrum.

Gert van Ooik, principal system designer mechatronics at Sioux Technologies in Eindhoven (NL), has been awarded the Bronze certificate from the ECP2 programme.