The youngest generation of mechanical designers is still inspired by the design principles of Wim van der Hoek. The nominations for the Wim van der Hoek Award 2022 bear witness to this.

The former Philips engineer and professor by special appointment at Eindhoven University of Technology passed away a few years ago at the age of 94, but his ideas are still taught and his name lives on in the prize named after him. The jury for this prize has received a total of five nominations from three universities of technology and two universities of applied sciences for students who applied existing or new design principles in their graduation work in an appealing way. The award will be presented for the seventeenth time on Thursday 17 November under the auspices of DSPE (Dutch Society for Precision Engineering). The award ceremony will take place in Den Bosch (NL) during the second day of the Precision Fair.

The Wim van der Hoek Award – also known as the Constructors Award – was introduced in 2006 to mark the 80th birthday of the Dutch doyen of design engineering principles, Wim van der Hoek. The objective was then, and still continues to be, to promote and stimulate the discipline of mechanical engineering. This award includes a certificate, a trophy produced by the Leidse instrumentmakers School and a sum of money (sponsored by the EAISI institute of Eindhoven University of Technology, TU/e).

Best graduation project The Wim van der Hoek Award is presented every year to the person with the best graduation project in the field of design in mechanical engineering at the universities of technology and universities of applied sciences in the Netherlands and Belgium. Criteria for the assessment of the graduation theses include the quality of the design, its substantiation and innovativeness, as well as its suitability for use in teaching design principles. This year the jury, under the presidency of DSPE board member Jos Gunsing (MaromeTech), received five nominations, submitted by the graduation supervisor/professor of each student concerned. The nominations came from Avans University of Applied Sciences (Avans UAS) in Breda, Fontys Engineering UAS in Eindhoven, KU Leuven University (Belgium), TU/e and University of Twente.

“Roy first followed a higher vocational education study, while having a sidejob in the technical field. Thanks to his broad education and experience, he has been able to convert theoretical insight and analyses into a functional and feasible design for an active vibration isolation system with highly favourable dynamic properties. He was one of the few students to deliver a design that our workshop technician could get to work on immediately, without having to redesign it for manufacturability. Roy has a hands-on mentality, which was evident in, among other things, arranging a free extension of the interface for our real-time hardware. With his energetic approach, he was able to get a lot done during his swift graduation period.”

“Alexis has pushed the scientific boundaries of machine tools. He developed a revolutionary alternative to the rigid spark electrode which, in Electro Discharge Machining (EDM), results in complex parts having to be assembled from several parts, with all the associated drawbacks. His actively bendable tool holder makes it possible to remove material from hard-to-reach areas via EDM. The application of soft-robotics technology in the field of machine tools is anything but trivial, and can be attributed entirely to Alexis’ creativity. He devised this concept and also realised a prototype system. His work is of very high quality and combines exceptional analytical skills with excellent practical insight.”

“Julia carried out her graduation project very professionally and achieved a lot with her ingratiating attitude. In addition, she searched for depth of content, investigated with a critical eye and kept digging until everything was right. She has mastered new theory in a broad assignment and actively challenged herself to achieve practical/experimental elaboration. She has delivered a very nice piece of work from a practical and theoretical point of view, technically very good with an eye for detail. Due to the practical aspects, the validation is very strong and therefore also the value of the end result.”

“Jeroen has made a monolithic adjustment mechanism for an interferometer, where it was important that there are no parasitic movements. He created a design to be printed in metal, using two concepts of flexible mechanisms that he put in series. One mechanism is a linear guide with compensation for the parasitic movement due to shortening for the translation. The other mechanism is based on the so-called tetra spherical flexure joint, where three rotations can be set around one point. Jeroen has worked in a very structured way and has carried out a thorough literature study in the field of flexible mechanisms and 3D metal printing. He is social and proactive and has a strong intrinsic motivation.”

Design of a voice coil actuated active vibration isolator for cryogenic conditions “Dennis has researched a voice-coil-actuated vibration isolation system for possible application under cryogenic conditions. This is one of the solutions to provide the Einstein Telescope for the detection of gravitational waves with a much-improved sensitivity. Commercially available cryocoolers produce noise, for which Dennis designed and largely realised a very elegant cryogenic active vibration isolator. He has shown that he is perfectly capable of coming up with an innovative mechanical and mechatronic design, including control, and analysing it on critical aspects. He has impressive inventive and analytical skills, and he works very independently, although he also knows how to approach people for relevant input.”

The presentation will be on Thursday 17 November, 4:00 p.m., at the Precision Fair in the Brabanthallen in Den Bosch (NL). 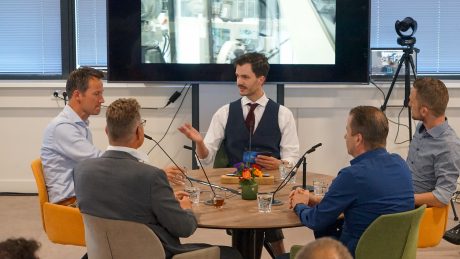 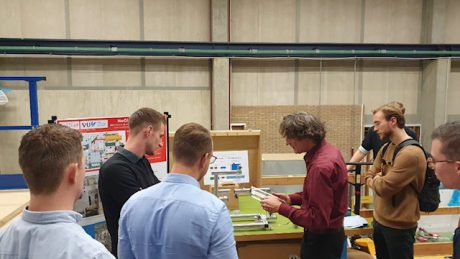 YPN visited Nikhef in the…

On November 24, YPN visited Nikhef and it was a great success. Nikhef is an institute that researches and develops scientific instrumentation, mainly for particle accelerators in Switzerland. 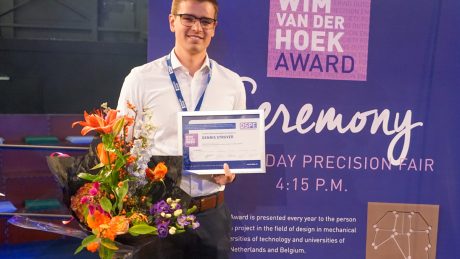 Prize for better measurement of gravitational waves. During the 21st edition of the Precision Fair, held this year in Den Bosch for the second time, the Wim van der Hoek Award was presented under the auspices of DSPE (Dutch Society…