The prize aims to encourage young talent and is intended for a young precision engineer who has worked for some years in a company or institute and who has a demonstrable performance record that has been recognised internally and externally. Candidates must also use their enthusiasm to have a positive effect on young colleagues.

In 2021  we will organise this Award Ceremony again.

Prize for natural designer in optomechanics and precision engineering

During the 18th edition of the Precision Fair in Veldhoven, the Netherlands, the Ir. A. Davidson Award was presented, under the auspices of DSPE, to Lennino Cacace. Cacace is the owner of AC Optomechanix, an engineering firm for optomechanics and precision engineering. He received the prize for his outstanding designs of complex optical systems and sensors, and his contribution to education in optomechatronics.

DSPE board member Toon Hermans, the managing director of Demcon South, presented the Ir. A. Davidson Award on the afternoon of Wednesday 14 November. The purpose of the prize is to encourage young talent by recognising the efforts of a precision engineer with several years of experience working at a company or institute and a proven performance record which has been acknowledged internally and externally. Candidates must also have a demonstrated enthusiasm for the field that produces a positive effect on young colleagues. The biennial prize, which was established in 2005, is named after an authority in the field of precision mechanics who worked at Philips in the 1950s and 1960s. The prize comes with a certificate, trophy and sum of money. The trophy was created by the Leiden Instrument Makers School (LiS) in the form of the handbook in precision mechanics that Davidson used as a foundation when forming the constructors community at Philips.

Complex optics
This year, the panel of judges for the Ir. A. Davidson Award received a large number of nominations of excellent candidates, from which they unanimously selected Lennino Cacace as the winner. He studied Mechanical Engineering at Eindhoven University of Technology (TU/e) and graduated cum laude. In 2009, he obtained his Ph.D. degree from Maarten Steinbuch, a TU/e professor of control engineering, for the design of a measuring head for the advanced measuring machine Nanomefos, developed by TNO for freeform metrology. In 2006, he had already established his own company, AC Optomechanix, an engineering firm specialising in optomechanics and precision engineering. He has developed various complex sensors and has worked for, among others, the lithography machine builders ASML and Liteq. At the latter company, now part of Kulicke & Soffa, he fulfilled the role of optical-mechatronic system engineer for Liteq’s waferstepper for packaging chips. He also was responsible for a large part of the optical design, including the mechatronic design of the optical column of the machine.

Education in optomechatronics
As of the last year and a half, Cacace has been involved in the new Master of Optomechatronics that was set up at TU Delft. In his own lecture on optomechatronics, he gives a good overview of the system aspects and the constructive, optical and even electronic aspects of designing an optical system. In future, this course will also be given in Eindhoven, in a form that is tailored to the industry.
“There are few mechanical engineers who have already studied optics so well during their studies. At the same time, Lennino is a good designer. What is also special is that he has a clear vision of the profession and has succeeded in incorporating this into the optomechatronics master and lecture.” So said the panel of judges, who characterise Lennino Cacace as an inquisitive, helpful and very honest natural designer and a perfectionist. “He is highly skilled in theory and in practice and experimentation and is keen to pass on his knowledge.”

This year, the Ir. A. Davidson Award procedure started with a large number of nominees. The panel of judges, however, was unanimous in its decision to honour Wouter Aangenent. He studied Mechanical Engineering at Eindhoven University of Technology (TU/e), the Netherlands, and obtained his Ph.D. at the same university in 2008 on a control subject. Subsequently he started within TMC, the high-tech engineering company that encourages its employees to develop their entrepreneurial skills, to work for ASML. In 2010 he was enlisted by the Veldhoven-based lithography machine builder, where he now serves as a control architect and project leader. He has grown to become one of the leading specialists in control/mechatronics. In that capacity he has become a champion of an ASML-wide Way of Working for control design, guaranteeing high performance and robust controller implementation in all machine modules. Wouter Aangenent is very active in transferring his knowledge to, and enthusing (upcoming) talent. For instance, he regularly delivers presentations at conferences and encourages colleagues to do the same. He was one of the initiators of the ASML Servo Control training and provides this training to (new) employees, in the Netherland as well as in the USA.

The full jury report can be downloaded here.

A new edition of the DSPE Knowledge Day on Engineering for (Particle) Contamination Control will be held 2 April 2020.. The event will focus on design aspects aimed at dealing... 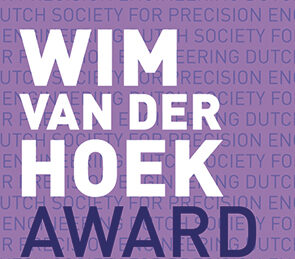 During the 18th edition of the Precision Fair, the Wim van der Hoek Award 2018 was presented under the auspices of the DSPE (Dutch Society for Precision Engineering). The prize...